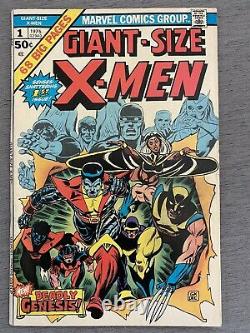 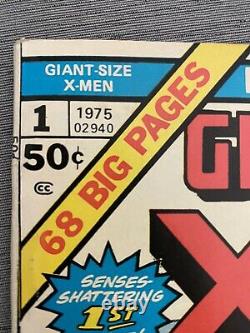 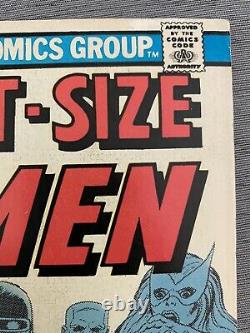 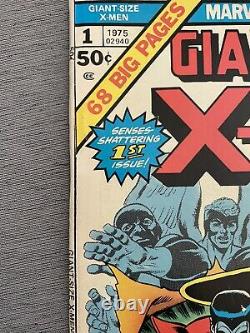 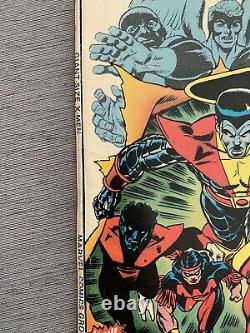 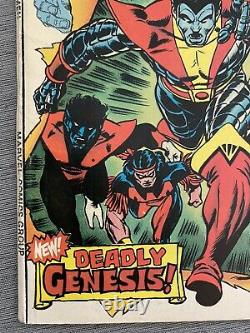 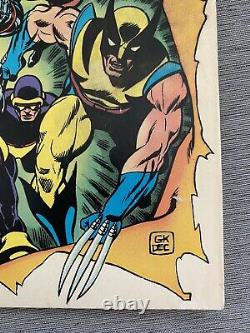 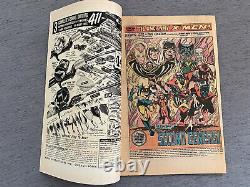 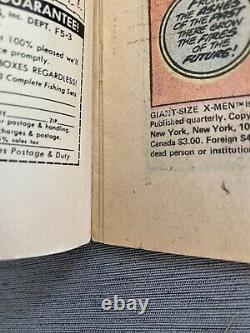 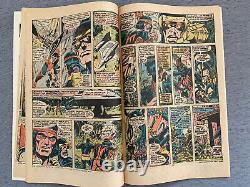 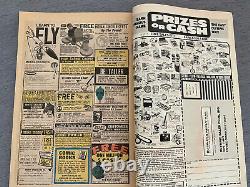 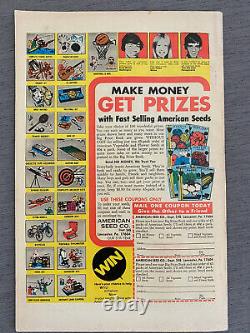 This item is a raw comic and is not considered to be high grade. This is considered to be a solid mid to higher-mid grade GSX#1. There are scuff marks on the cover as well as minor creases.

The corners are not sharp but in good shape and may have folds or wear and tear. The front and back cover has some grime on the white areas that will benefit from a cleaning and pressing, possibly could get grade bump and nice CGC slab.

The spine is in good shape with very few visible tics or defects, which is rare for this book due to its thickness. The staples are intact through the thickness of the comic and all pages, however the lower part of the cover has separated from the spine and there is a visible separation at that part (refer to photograph). The back cover is slightly grimy with minor scuff and will benefit from TLC or cleaning. All in all, the comic is a solid mid grade or higher, all pages intact, front and back cover intact, center pages intact, some wear related scuffs on the cover. Please review in detail the pictures in this listing that provide close up photos of the raw comic and the condition described above.

Giant-Size X-Men #1 was a special issue of the X-Men comic book series, published by Marvel Comics in 1975. It was written by Len Wein and illustrated by Dave Cockrum. Though not a regular issue, it contained the first new X-Men story in five years, titled Second Genesis. The issue serves as a link between the original X-Men and a new team.

Chronologically it is placed after X-Men #66 and before X-Men #94. The 68-page book was published with a May 1975 cover date and distributed to newsstands in February of that year. Cover of Giant-Size X-Men #1 (May 1975) Art by Gil Kane and Dave Cockrum. The X-Men title stopped producing new stories after #66 in March 1970. From December 1970 through April 1975, Marvel reprinted many of the older X-Men issues as #6793.

Following the May publication of Giant-Size X-Men #1, Marvel began again publishing new issues of X-Men with #94 in August 1975. The comic also collects reprints from X-Men #43, #47 and #57. The story opens in medias res, with Professor X recruiting a new team of X-Men, to rescue the original X-Men (Marvel Girl, Iceman and Angel [but not Beast, who had left the team], plus X-Men recruits Havok and Polaris), who had disappeared on a mission to the island of Krakoa, with only their leader Cyclops escaping. The new team consists of Sunfire and Banshee, who had been introduced in earlier X-Men comics; Wolverine, who had made his first appearance in The Incredible Hulk #181 Oct. 1974; and the newly created Storm, Nightcrawler, Colossus, and Thunderbird.

These members are gathered from all over the world, and Professor X uses his telepathic powers to teach them all English so that they can communicate with each other. The team soon learns that Krakoa is not just an island, but a giant mutant as well. Despite a number of personality clashes among the individual members, the new team succeeds in rescuing the old X-Men as well as destroying the island by shooting it into outer space with Polaris' power. The issue ends by posing the question of the future of a 13-member X-Men team. The later storyline "Deadly Genesis" offers a ret-con of this story, which tells how Professor X had initially recruited a different team before the events in the title who failed.

Pencils, cover inks Dave Cockrum. Inks Dave Cockrum & Peter Iro. The "Second Genesis" story was reprinted in Classic X-Men #1 in September 1986, with substantial editing to reduce its length, and a new backup story by Claremont and John Bolton bridging the gap between this and the following issue, Uncanny X-Men #94. Marvel published a second issue of Giant-Size X-Men later in 1975.

This November issue had no new material, instead featuring reprints of stories from X-Men #57, #58, and #59, written by Roy Thomas and illustrated by Neal Adams. In 2005, Marvel published two new Giant Size X-Men issues to celebrate the 30th anniversary of the original. Issue #3 in July contained a story written by Joss Whedon and illustrated by Neal Adams. The issue also reprinted several older X-Men team-ups: the group's appearance in Fantastic Four #28, an Avengers guest appearance in X-Men #9 and a story featuring Spider-Man in X-Men #35.

[3] In November, Chris Claremont penned a story for issue #4, with artwork by Adams. It also reprinted material related to the death of Thunderbird from X-Men #94-95, Classic X-Men #3 and Uncanny X-Men #193. Five Giant Size X-Men one-shots, all written by Jonathan Hickman will be released as part of Dawn of X between February and September 2020. The first, Giant Size X-Men: Jean Grey and Emma Frost, was drawn by Russell Dauterman and colored by Matt Wilson. [5] The second, Giant-Size X-Men: Nightcrawler, was drawn by Alan Davis and colored by Carlos Lopez.

The seller is "taars_59" and is located in San Ramon, California. This item can be shipped worldwide.