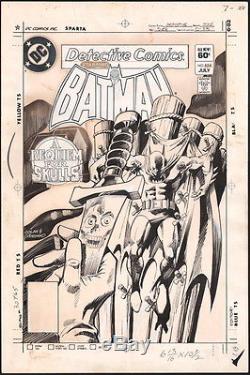 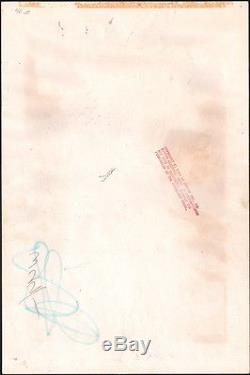 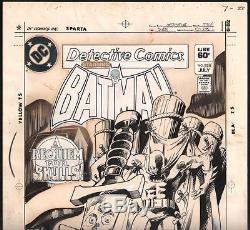 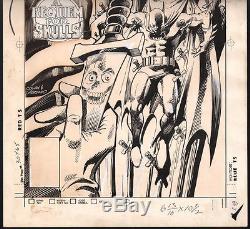 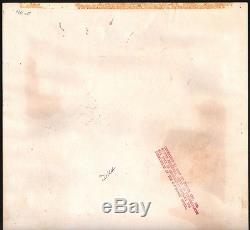 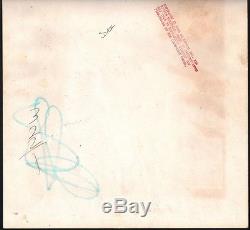 This stunning 33-year old Batman artwork features the pencils of Gene Colan (see biography below) with inks by Dick Giordano (biography also below) and is the original cover art to Detective Comics #528 from 1983. Colins acclaimed talents in creating an atmosphere of moody horror through his art are on full display and Giordanos inks never disappoint. The cover measures 12 by 18 inches, is in good condition overall - does have some tanning due to its age but not bad (see scans) and was stapled multiple times along its top border (these tiny staple holes do not go into the artwork itself and extend down roughly only one centimeter from the top edge of the page). Also, a small portion of the surface area outside the artwork borders was lifted off, presumably by tape, near the mid-upper right side (on and above the letters BLA TS which should read Black TS). Again, though, this does not go into the artwork itself. Please note - the hand itself, the dagger it holds, the skulls reflection in the daggers blade, and of course Batman as well as the wooden posts and multiple dagger restraining him, are all hand-drawn by Colan and hand-inked by Giordano. But naturally, the logo, story title, DC bullet logo, cover price box, and the Comics Code Authority seal are stats (all of the proceeding were affixed after the penciller and inker created the image itself). This was of course common practice for covers at the time, the title, etc. Not actually being hand-drawn (they are added by computer these days). Other than these, further stats were added to enhance the overall detail of the cover. These include the black area behind the story title A Requiem for Skulls!

- which appears to feature the tops of two buildings - as well as the somewhat circular blob with lines above it to the left, the blackened areas (those areas to the left of both the UPC box area and the dagger wielding hand) including the blackened area noting Colan & Giordano. The blackened, lined area to the right of and below the Comics Code Authority is also a stat. Please note- scans above of both the front and back of the artwork include the full image but I also scanned in sections of the cover (approximately half for each) in higher res to highlight greater detail. One final note- Detective Comics, from which DC takes its name, is the longest running continuously published comic book and, most notably, introduced Batman in 1939 with issue #27.

This is Batmans 499 appearance on a Detective Comics Cover (counting issues 32 and 34, which featured Batman in the title logo if not actually as the subject of action). About the penciller, Gene Colan.

The legendary Gene Colans comic career began in 1944 during the Golden Age and he remained active until his passing in 2011. While popular for his work at Marvel Comics (on such titles as Daredevil , Iron Man , Howard the Duck and Captain America), he is perhaps best known for his groundbreaking work on The Tomb of Dracula. One of the true classics of the horror comics genera, Colens unique, eerie style was a perfect match for the lord of the vampires. Fittingly, shortly after his critically acclaimed run on TOD , Colan brought his dark and somber style to another bat-inspired creature of the night, serving as DCs primary Batman artist for half a decade (from 1981 to 1986). During that time, he penciled the interiors to most issues of both Detective Comics and Batman , providing numerous covers as well. By no means a complete list, his other work includes such Marvel titles as Astonishing Tales , Captain Marvel , Doctor Strange , and Marvel Comics Presents , as well as Wonder Woman , Night Force , and Superman; Phantom Zone for DC as well as many of their War titles and their Romance comics. He also illustrated Dracula for Dark Horse (not associated with Marvels TOD) and Buffy The Vampire Slayer.

Colin is ranked 25th on Atlas Comics Top 100 comic artists of all time and has received numerous awards, include an Eisner, an Inkpot, two Eagle Awards (he was nominated for four more), and was inducted into the Will Eisner Comic Book Hall of Fame in 2005. About the inker, Dick Giordano. He is perhaps best known for his work on Batman but his contribution to comics in general cannot be overstated. He began his career at Iger Studios and soon moved to Charlton Comics (in 1952), where worked his way up to editor, bringing in new talent such as Jim Aparo and Denny ONeil (who he would later bring to DC).

In 1968, at the suggestion of Steve Ditko, Irwin Donefeld and Carmine Infantino hired Giordano. One of his first assignments was editing Ditkos creation Hawk & Dove for Showcase #75. He went on to pencil and ink numerous DC characters, including inking Neal Adams' classic run on Green Lantern/Green Arrow. He left DC for a time, drawing The Deadly Hands of Kung Fu and Dracula for Marvels black & white magazines, co-founded with Neal Adams Continuity Studios, and illustrated several other projects before returning to DC. He was also instrumental in helping to develop DCs popular Vertigo line of books and bringing in such British talent as Alan Moore and Neil Gaiman.

Please inquire for full details. We package items extremely securely. We apologize for any inconvenience and appreciate your understanding. Your government may impose upon you before they will release the package to you.

In order to stay ahead of the collectables market curve and offer the security and piece of mind that a mere paper COA does not and cannot provide, empire. Auctions offers certification through Collectors Proof. As always, all autographed items I sell were personally witnessed - by myself - being signed by the artist, writer, creator or celebrity in question. Further, art sketches - and most published pieces of original artwork I sell - were obtained directly from the artists themselves.

Not only is this a record of the guarantee of the authenticity of the item, traceable back to its original source, but it also maintains a permanent web-based record of ownership accessible from any computer with internet access. It also allows the current owner to print out a hardcopy of a Certificate of Authenticity (COA), if desired, but without the need of actually having to protect physical paper certificates from loss or possible destruction as the documentation is permanently maintained and available online. Please note- the guarantee that I sell only signatures I personally witnessed the signer in question autograph is real regardless of whether or not you opt for the authentication service through Collectors Proof. The item "Gene Colan & Dick Giordano Original Batman Detective Comics #528 Skull Cover Art" is in sale since Thursday, February 04, 2016. This item is in the category "Collectibles\Comics\Original Comic Art\Covers".

auctions" and is located in Ringgold, Georgia. This item can be shipped worldwide.