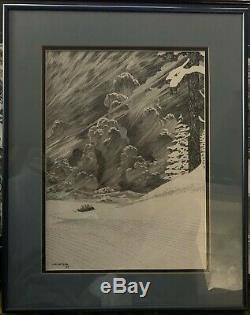 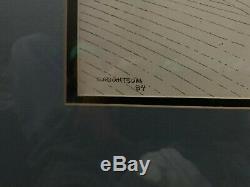 Stephen King's Limited Ed The Stand. So this is something that doesn't come up for sale every day.

One of original pieces used in the limited edition of the The Stand. The way it worked out, Wrightson got paid out for this project twice, once by King to lock in the illustrations, and a second time by Doubleday for the rights after king insisted that they use his artwork for the limited.

This piece was bought directly from Bernie and Liz "back in the day" but is now available to a good home. It is in his usual medium, ink over graphite on illustration board with an image area of aprx 11" x 15" and of course signed and dated. Bernie was known for his detailed inkwork, and yes this project was done. He broke his working hand. We grade Fine, Near Fine, Very Good, Good, Fair.

Any faults are always noted including remainder marks, price clipped dust jackets, and previous owner markings. If not noted then they do not exist on this book. First Edition always means First Printing, book clubs and later printings are never considered first editions. The item "Bernie Wrightson Original Ink Illustration for Stephen King's Limited THE STAND" is in sale since Wednesday, August 21, 2019. This item is in the category "Collectibles\Comics\Original Comic Art\Other Original Comic Art".

The seller is "lavendierbooks" and is located in North Scituate, Rhode Island. This item can be shipped worldwide.